Abbott defended the state's decision to audit 2020 election results at Trump's request as Chris Wallace questioned whether it is a "terrible waste" of tax dollars.

US House Speaker Nancy Pelosi expressed confidence a massive infrastructure bill will pass this week but acknowledged it might not get a Monday vote as planned, with fellow Democrats warning critical work remains to meet the party's deadlines. But Pelosi,...

DHS: More than 12,000 migrants from Del Rio surge have been released into US

The secretary of the Department of Homeland Security stated on Sunday that the majority of Haitian migrants who recently crossed the Mexican border to Del Rio, Texas, have been released into the United States, with possibly more to follow.

The Latest: Pfizer close to big step toward kids' vaccine

WASHINGTON — Pfizer’s CEO says “it’s a question of days, not weeks” before the company and German partner BioNTech submit data to U.S. regulators for federal authorization of a COVID-19 vaccine for children age 5 to 11. That would be an important...

The Latest: Pfizer close to big step toward kids' vaccine

WSJ Opinion: Hits and Misses of the Week

Your TV is way too bright, and your eyes are paying the price

Walensky: 'We don't necessarily have the answer' for annual boosters 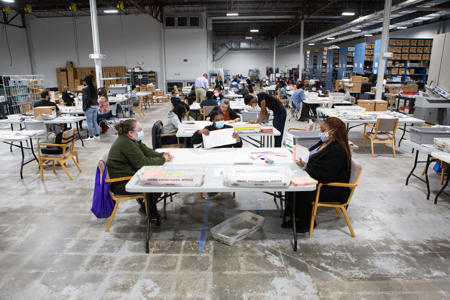 Selling in the suburbs: Republicans look to reclaim suburban voters turned off by Donald Trump